How to effectively partner with the private sector to steer jointly towards UHC: Cabo Verde´s health regulatory system assessment

The World Health Organization (WHO) supports its member states in leveraging legal frameworks to better steer a country towards Universal Health Coverage (UHC). This work is vital because health-related legislation is a crucial aspect of UHC reform but is often overlooked and insufficiently addressed. Many countries’ legal and regulatory frameworks may actually not be compatible with the UHC goals, thus assessing them should be an integral part of UHC reform.

A recent mission to Cabo Verde (29 August – 2 September 2016) examined the country’s health regulatory system in a rapid assessment format in view of including this important area of work within its work plan of the European Union-Luxembourg – WHO UHC Partnership.

The mission’s legal expert reviewed existing Cabo Verdean health laws to identify weaknesses and gaps as well as areas for possible legal reform with regards to private sector regulation.  One key part of government’s efforts to better regulate the private sector in line with the objectives of UHC is getting the right regulatory institutional arrangements in place.  In view of this, a review of all existing regulatory agencies working in the health system was also conducted, including a closer look at their capacities and capabilities.  One option that was developed as part of this process was whether all health sector regulatory functions should be consolidated within a single regulator.

In addition to the technical review of laws and documents, discussions were held with key health systems stakeholders – policymakers, regulators, administrators and service providers, officials from the office of the Prime Minister, the Ministry of Finance, the parliamentary committee for health, and consumer organisations – with the aim of better understanding the Cabo Verdean context, history, and current challenges as well as exploring future options.

Health laws in any given country do not exist in a vacuum; rather, they are part and parcel of a broader institutional framework within which a health sector operates.  Therefore, the WHO mission team also explicitly examined Cape Verde’s broader health systems governance framework and its impact on health sector regulation.

To improve private health sector regulation, the following concrete next steps were recommended by the WHO mission team: 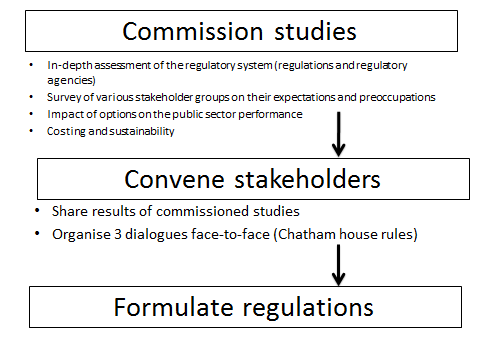 The country office is continuing to support the government to implement the process mentioned above; with the aim of better leveraging legal frameworks to steer jointly towards UHC. For further information on UHC law reform visit the WHO Health Law Web Site or contact healthlaws@who.int.

Democratic Republic of the Congo

Saint Vincent and the Grenadines